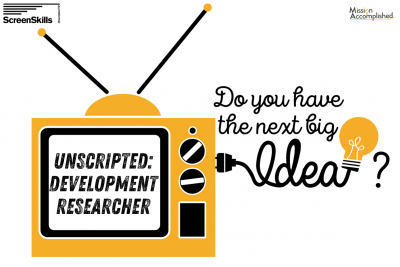 If the answer to these questions are YES, then our Unscripted: Development Researcher training programme is for you.

The course is aimed at those who want a career in unscripted and who:

This, free to attend course, is taught by a highly experienced unscripted Development Professionals and is aimed at ensuring that unscripted production companies have access to a cohort of skilled and trained Development Researchers who will bring new and fresh ideas to their companies. During the course participants will meet Unscripted Commissioning Editor(s).

Development Researchers need to be brimming with ideas and able to spot new trends, subjects or people who could make great TV.

This training course will prepare participants with the knowledge they need to become Development Researchers. By the end of the course participants will have created their own portfolio of unscripted ideas.

The course is designed as a part-time, 30-hour course running over a 6-week period.

It will run 4 times between January and August 2022.

The majority of the training will take place online and outside of traditional office hours.

There is one full day, midweek, of face-to-face training planned (Covid restrictions permitting). These will be spread across the UK.

WHO IS THE COURSE FOR?

The course is aimed at those who want a career in unscripted and who fulfil at least one of these criteria:

We are looking for people who have a passion for unscripted TV and are brimming with ideas.

You don’t need to have worked in TV or development before to apply for this course.

BY THE END OF THE COURSE

This training course is a fast-track opportunity for individuals who are looking to make their next move as an unscripted Development Researcher.

By the end of this training course participants will have :

This course will run four times between January and August 2022.

The first session of each course will be a double session on a Saturday morning (online) and subsequent sessions will be on Monday and/or Tuesday evenings (online). There will be one face to face full day midweek session for each course. Participants are expected to attend all sessions of the course.

This course is delivered by Unscripted TV Professionals

Sophie is a BAFTA nominated and RTS award-winning film and TV producer and commissioning editor. As Head of Development for production companies like September Films, Cineflix and World of Wonder she has developed, pitched and exec produced hundreds of hours of TV content for all major broadcasters across all genres with credits that include series Star Lives (ITV Saturday night Entertainment), European Nightmare (BBC Daytime), Pete Burns Unspun (Channel 4 Popular Documentaries), Haunted Homes (ITV2 Entertainment), Clubbing On The Frontline (Channel 4 Current Affairs) as well as originating and exec producing Channel 4’s first original digital content This is a Knife. She also set up and ran September Films’ Los Angeles Development Department and ran LA-based indie World of Wonder’s (Ru Paul’s Drag Race) UK division. As Commissioning Editor for Living TV, she commissioned and Exec Produced the channels highest rating series of Britain’s Next Top Model and the channel’s highest ever rating series Jade and Jade: With Love following Jade Goody’s battle with cancer.

She has also been nominated for a film BAFTA for Bouncer, featuring Ray Winstone and Paddy Considine.

Perjeet is a Birmingham-based creative making and developing factual content for terrestrial and multi-platform broadcasters.

Alongside this her Series Producer credits include Secret Life of the Thames with Tony Robinson (6×60′ C5), Maddie’s Do You Know (15×20′ Cbeebies) and Great British Menu (BBC2) for which she won an RTS Midlands Award and Joe Wicks Body Coach (6×6′, 4OD)

She is passionate about supporting and promoting diverse off-screen talent and has mentored via Creative Access and Channel 4.

Chris Roberts has spent the last 25 years editing everything from online corporate promos to broadcast television and using software from Avid, Apple, Adobe, and Blackmagic Design.

He has provided video editing training since 2003 to university students and staff, broadcast journalists, and sports, factual, and drama editors. As a Blackmagic Certified Master Trainer, he has been responsible for providing DaVinci Resolve training across Europe and the US to end users and other trainers.

Over the years, he has also written articles on video editing techniques and editing software for a variety of magazines and online publications, as well as serving as a technical reviewer for several books.

Chris lives in Worcestershire, UK, with his partner Samantha and, when not working, enjoys reading post-apocalyptic fiction, listening to hard rock and blues music, and binge-watching the TV he has invariably missed.

This course would normally cost participants £200, but thanks to funding from the ScreenSkills Unscripted TV Skills fund, it is currently being offered to you free.

If you fail to attend we reserve the right to request reimbursement of costs, unless your place can be taken by someone else.